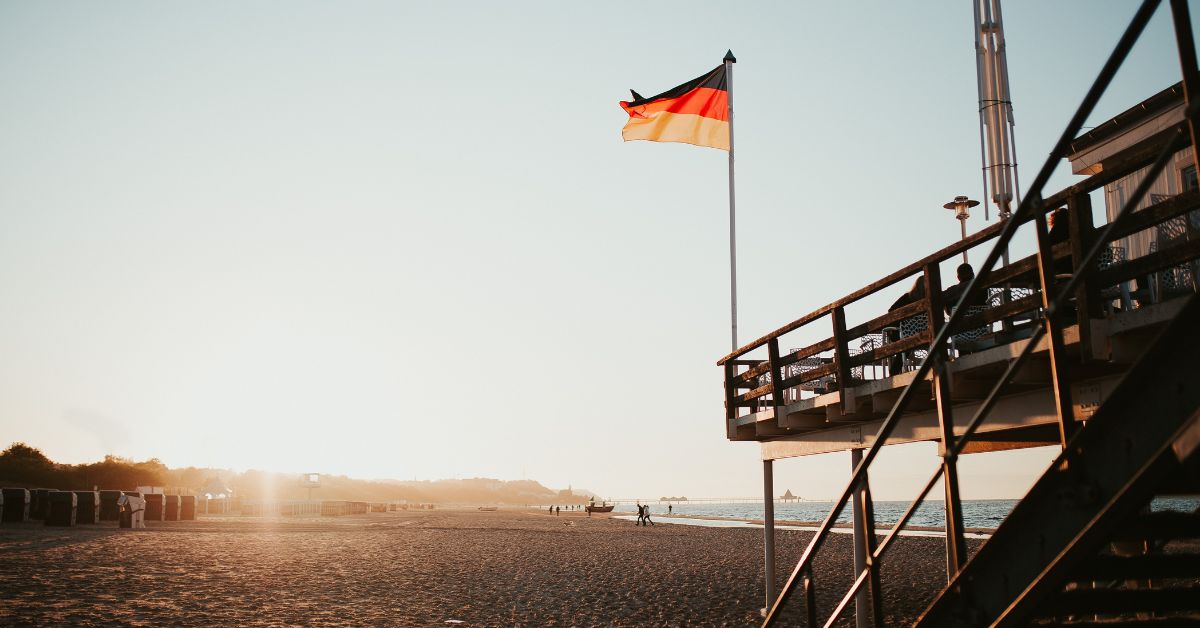 Whether it’s from watching the 80’s British comedy-drama television program or out of the mouth of a generic movie villain, you’ve probably heard the phrase auf wiedersehen.

It’s the correct way to say goodbye in German.

But much like our own language, the’s plenty of other phrases to use when you part ways with friends and strangers.

We tend to pick between different words depending on the context of our departure and the company we are with.

A “see you later alligator” is probably not the most appropriate when you leave a serious event and “laters” would be viewed as unprofessional.

If you want to be able to handle a German goodbye in formal settings as well as casual social gatherings, then this is the article for you!

We’ve garnered some great expressions, for every occasion, to teach you to confidently say goodbye in German no matter the circumstances of your exit!

Our intro got pretty to the point with Auf Wiedersehen it is one of the most common ways to say goodbye in German.

However, it is considered pretty formal in modern times! Hence our efforts with the article!

If we break down Wiedersehen we get “again” (Wieder) and “see” (sehen). So it translates to “I’ll see you again”, rather than a well-wishing “goodbye”.

This one again is easy to confuse as a learner with Auf wiedersehen but the use is very specific so watch out!

Again, it is a formal expression.

You can see the difference in the expression and the one above is that the “sehen” part has become “hören”.

Hören is the german word for “hear”. Auf wiedehören is, therefore, “I’ll hear you again” in a literal sense. It could be compared to the way we end letters and emails with I look forward to hearing from you.

However, it better equates to the way we say “speak soon” or “talk to you soon” but not quite!

It is a handy phrase to know, but only use this German goodbye when you are hanging up the phone because you are specifying “hearing” from them.

Although Auf wiedersehen is the common and correct way to say goodbye in German, you are more likely to hear Tschüss being thrown around in formal and non-formal settings.

You could view it as the difference between goodbye and bye or see you later and later!

Being a widely used expression and much more casual it is a great word to have in your vocabulary if you want to blend in with the locals.

The word stems from a french adieu, adopted and adapted by the dutch to “adjuus” and eventually evolving into tschüss.

Sometimes you will hear tschüssi or tschüssi tschüss, it’s a bit like ‘byee’ or ‘bysie bye’, not common but a cutesy or jovial way of adding character.

You may even hear a “tchüssli müsli” if a child is being spoken to, this translates as bye muesli, total nonsense but it rhymes and is a bit like “see you later alligator”!

On the subject of “see you later” (minus the alligator), you will undoubtedly hear Bis später on your travels.

It is a great phrase to use in a workplace, if you leave the office for lunch and are returning, or if you share a house and are off out but know you will be back that afternoon or evening.

It is an informal expression, “Bis” is the word for “until” and “später” means “later”, so it is literally “until later”.

As “bis” means “until” it can be followed by a whole host of other words which we will take you through in a moment.

In the same sense as “tchüssli müsli” above, you might hear a silly “Bis später, Peter” which means “See you later, Peter” simply for rhyming sake.

You might want to say see you soon to a friend that you see frequently. Bis bald means “until soon” and is the ideal phrase to convey that.

Like bis bald a “ Bis Dann ” might come in handy for an informal goodbye. Less specific than soon, it can be used if you aren’t sure when you will see the other person again.

So long as they are close friends, colleagues, or family.

Bis Dann literally translates to “until then”.

Bis Zum nächsten Mal is a less common goodbye because it is much more specific. It means “until next time”.

It is typically reserved for an annual gathering like a birthday, anniversary, or Christmas party.

Ideal for a respectful German goodbye to the in-laws that you only see once a year.

Bis morgan means until tomorrow, but you could place any time, day, or date in its place.

Take a look at the following for inspiration;

A nice farewell for the morning is Schönen Tag noch it literally translates as “still a nice day ahead)” but means something like “have a nice (rest of the) day”.

Like the above, you can use this one later in the day switching the tag to abend means “still a nice evening ahead”.

Schönen Abend noch is a great phrase to use in place of goodbye, wishing your friend a great evening. It is especially thoughtful if you know your friend has plans later.

“Wochenende” is the German word for the weekend, so this one is great for the workplace and educational settings.

Adding the phrase “Schönes Wochenende” to your mental German phrasebook means you can say “have a nice weekend” to a colleague or peer on a Friday before clocking out!

Of course, on the subject of specific goodbyes and times of day, you might want to include  Gute Nacht “goodnight” if you leave someone’s home late it is the easy way to say goodbye.

A less common but sincere way to give someone a big heartfelt goodbye is “lebewohl”. It comes from Lebe (live) and wohl (well).

It is a little grandiose or antiquated to say “live well” but nevertheless is it used to say farewell while wishing someone a safe departure.

Okay, so we are getting really informal and friendly here, though not a true goodbye, and more interjective Ich muss gehen, “I have to leave”, or Ich muss los “I gotta go” are two more great phrases to learn.

In modern times most Germans speak at least one other language, typically English or French.

So you will hear bye a lot, the full-English farewell “goodbye” is much less common.

The Italian ‘Ciao’ is prominent throughout many European countries and Germany is no exception.

Germans say Ciao quite often as a quick form of goodbye, they pronounce the word the same but write it with their own phonetics like this; “Tschau”.

Germans also borrow the French expression ‘Adieu’. Surprisingly the French use it very little, it translates as “to god” and they consider it far too formal these days.

But, just as the roots were adapted into their modern word tchüss used commonly in Northern Germany, the folk in Southern Germany and Austria use “adieu” quite a lot.

Bavarians adapted the word further; Ade is their variation on the word adieu, it is easy to pronounce and another way to say “bye” in German.

You will find that Germans mix and match the expressions above, especially if they are saying goodbye reluctantly, which can become more long-winded.

Below are a few examples to get the cogs whirling in your brain.

As you can see, by learning the vocabulary in today’s article even a beginner can pick and mix to sound like a pro.

Before we conclude our write-up and say auf wiedersehen ourselves we thought we’d leave you a few ways to say goodbye by email. Ideal for business or penpals and language exchange online!

Formal and casual use;

How to Say Goodbye in German – Video Guide

Saying goodbye is a key first phrase to learn in any language. Just a handful of words go a long way as you can see with our pick and mix section.

Tschüss is a great informal word to take away from today’s selection if the amount of vocab is overwhelming.

You don’t have to be fluent to impress a German speaker with the gesture of trying to learn their native tongue.

Armed with the above even a beginner can desperately gesture and muddle their way through a conversation confidently knowing they can at the very least end it appropriately.

How to Say – You’re Welcome in German

How to Say – Yes in German

You’re Welcome in German: 13 Über Polite Ways to Say It

How to Say Thank You in Hindi: 6 Best Ways to Give Thanks